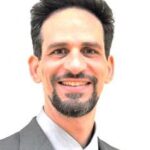 He was also the Project Manager of the EC’s Open PM² Initiative, a project aiming at bringing the PM² Methodology and its benefits closer to EU Member States Public Administrations. He is also a founding member of the PM²-Alliance (www.PM2Alliance.eu).

Nicos has also been involved in many international projects in Canada, the United States, the United Kingdom, Ireland, Belgium, Austria, Germany, Portugal, Luxembourg and Greece, working both with large organizations and with smaller ventures and start-ups.